What is board authority and what is the impact of Act 1?

Mandated costs less board authority represents the amount of mandated costs outside of the board's capacity, which then must either be covered by increased state funding (which typically covers a small portion) or cuts to other educational programs. Illustrated below is a school district with mandated costs increasing at the statewide 6-year average annual percent change of 2.75%, a total budget funded 42.8% by property tax revenue and an Act 1 index of 2.4% in 2019-20.

Table: Board Authority and Act 1 Index 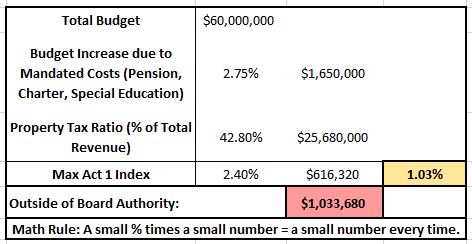 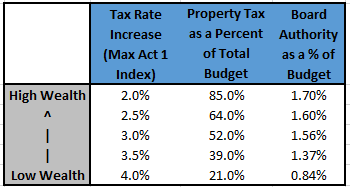 Click on the image link below to view our interactive map illustrating for each school district board authority for 2019-20 based on their property tax ratio and their 2019-20 Act 1 index.

Map: Board Authority and Act 1 Index